Sonic Pi is a free application that uses code to make music. It is hugely engaging for young people and has a low enough starting point to be accessible for many learners with special needs. The code on the right, for example, will play the first line of Frere Jacques. Students can easily modify existing code, by changing the notes (i.e. numbers) and the pauses between them. Having an immediate, auditory output is motivating and more tangible for learners to understand how they change the program. 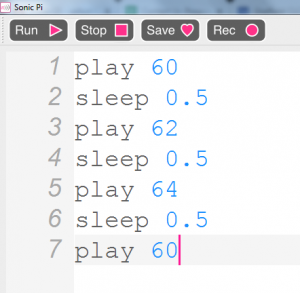 Students can also learn more complex programming concepts such as loops, selection and variables, and have a go at live coding a music performance. You can download the software for free for Windows or Mac from http://sonic-pi.net/ or it comes bundled with a Raspberry Pi (hence the name).

Although not as accessible as a block-based program, the colour coding provides support for learners in identifying errors, and it comes with predictive text options so that you don’t have to type out the commands each time (see below). You can also change the theme to dark, with a black background for higher contrast. Unfortunately Sonic Pi won’t currently work with a screen reader, but the developer, Sam Aaron, has indicated that the next version should include support for this which will make it ideal for working with visually impaired young people. 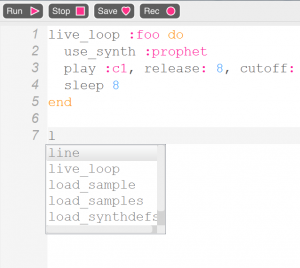 There is a Getting Started with Sonic Pi set of resources by the Raspberry Pi foundation, that will teach you and your students the basics, plus lots more support on the Sonic Pi website itself.